Being a Pirate Hunter

This is an article that I wrote for Alert Diver Magazine, published Q2 2015.

For many nondivers it's hard to disassociate the practice of scuba diving from the romantic idea of finding long-hidden pirate treasure in a shipwreck beneath the waves. To be sure, discovering historic shipwrecks — and their treasures — is the stuff of many divers' dreams. Once we've put our heads underwater, some of us can't stop wondering about what else lies below. There are thousands of lost shipwrecks out there and thousands of stories still untold.

Sometimes daydreams become reality: I spent roughly four years living and working in the Dominican Republic in search of some of the oldest shipwrecks in the Americas. 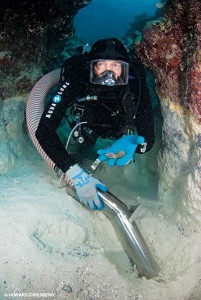 John Chatterton uses a dredge to search for silver coins at a wreck site.

I first met John Chatterton in the summer of 2007. At the time I didn't know about his many accomplishments: I had never seen an episode of Deep Sea Detectives or read Shadow Divers, although I had heard his name mentioned on ScubaBoard once or twice. We fast became friends, and I enjoyed learning of his adventures. Not only is Chatterton one of the few men to have visited the RMS Titanic in its final resting place, but he also helped identify the U-869 and found treasure on the SS Carolina, among a great many other feats.

One year after we met, Chatterton invited me to come to Samaná, in the Dominican Republic, where he and his business partner, John Mattera, had a dive shop called Pirate's Cove Dive Center. We spent a week doing some diving and technical dive training in and around Samaná, during which time I concluded the diving there was terrible. Then, for one of our last dives, we went to a very shallow site, no more than 18 feet deep, sandy and with poor visibility. We came to a cylindrical object that appeared to be about 10 feet long, and in a moment I realized what it was: a cannon. I couldn't believe my eyes. We were at a very old shipwreck site, and just like that I was hooked.

As it turned out, Chatterton and Mattera needed help with some of their wreck-hunting technology. They had in their arsenal a Geometrics G-882 cesium-vapor marine magnetometer and an L-3 Klein System 3900 side-scan sonar, both of which required technical expertise. I was a technical guy of sorts, having been a professional sound engineer for 15 years and a computer go-to guy, but I had never used either of those devices before. Nevertheless, Chatterton said, "You're our guy. When can you start?" Days later, we were hunting shipwrecks. 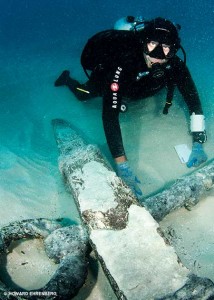 Chatterton dives on an anchor from the mid-1500s, which may be evidence of a shipwreck.

Anchors were some of the most important pieces of equipment aboard old wooden vessels, and often these ships carried several backup anchors. For us wreck hunters there are two kinds of anchors: working anchors, which are set in the bottom after having been irretrievably stuck, cut free and left behind; and anchors that lay flat on the bottom, which sank in the course of shipwrecks. Anchors and cannons were so valuable that it is unlikely they would have been left behind on purpose.

To find these key indicators of shipwrecks, we used our cesium magnetometer — an instrument that can detect slight variations in the earth's magnetic field. Since the cannons and anchors are made of iron and therefore have polarity, they can be detected with a magnetometer. The magnetometer also provides data that can be used to calculate the mass of objects, their distance from the tow-fish (the towed magnetometer) and, if buried, their depth below the bottom. When treasure hunting we towed the magnetometer behind our survey boat and spent hours methodically combing small grids of about a square mile in a technique we called mowing the lawn.

The waters surrounding the Dominican Republic are ripe for discovering Colonial-era shipwrecks. The Atlantic Ocean to the north of Hispaniola, the island that includes the Dominican Republic, is thousands of feet deep. As you near the island, the depths abruptly become shallows, and a ship in trouble during a storm could easily run aground. The entrance to Samaná Bay is particularly treacherous. For example, our primary work area was within a part of Samaná Bay called Barco Perdido, which means "lost ship" in Spanish.

After a few months we had located several old shipwreck sites, some of which contained cannons or anchors. We also turned up fish traps, cables and even a barbecue grill. Unfortunately, none of these sites contained anything worth writing home about. Nevertheless, we continued to comb the area, dive our finds and hope for something of value.

Working with boats and technology in the Dominican Republic posed another set of challenges. Namely, electronics and salt water do not mix very well, and we couldn't just run to the local Radio Shack when we needed wire and solder to fix something. Nor was it possible to ship necessary equipment to Samaná, as we learned when one package took more than six months to get to us. (Our address was, loosely translated, "the building down by the water's edge near the shipyard.")

The Search for the Golden Fleece

In 2008 while we were working in Samaná, renowned treasure hunter Tracy Bowden came to us for assistance in locating a ship that belonged to Capt. Joseph Bannister. Bannister wasn't just any captain — he was a pirate. And, as we'd soon learn, he was a good one.

Bannister was once a reputable captain who spent years sailing between England and Jamaica. But in 1684 he decided to seek fortune and glory by commandeering the Golden Fleece, a ship of 30 to 40 guns with a crew of more than 100 men. The British dispatched a ship that found and captured Bannister, who was put on trial in Port Royal, Jamaica. He was acquitted of the crime but ordered to remain in Port Royal. Bannister escaped, however, and continued his pirating ways.

In 1686 Bannister was discovered to be hiding and careening (grounding his vessel for maintenance and repairs) in what is now called Bahia Samaná. The British sent two warships to capture him and bring him to justice. Bannister, however, was clever and had prepared for an attack. He had offloaded some of the cannons from the Golden Fleece and set up shore batteries. This strategic maneuver proved successful, and Bannister was able to hold his own against the Royal Navy, an astounding feat that no pirate had ever before accomplished. After a two-day battle in July 1686, the British were forced to sail away without their quarry, having spent all their ammunition.

Even though the British didn't sink the Golden Fleece, it was badly damaged and couldn't sail. Bannister scuttled the ship and escaped Samaná on a smaller ship he had previously captured. The British eventually captured and killed Bannister in early 1687, but the legendary pirate left behind his prized Golden Fleece — right in our backyard. 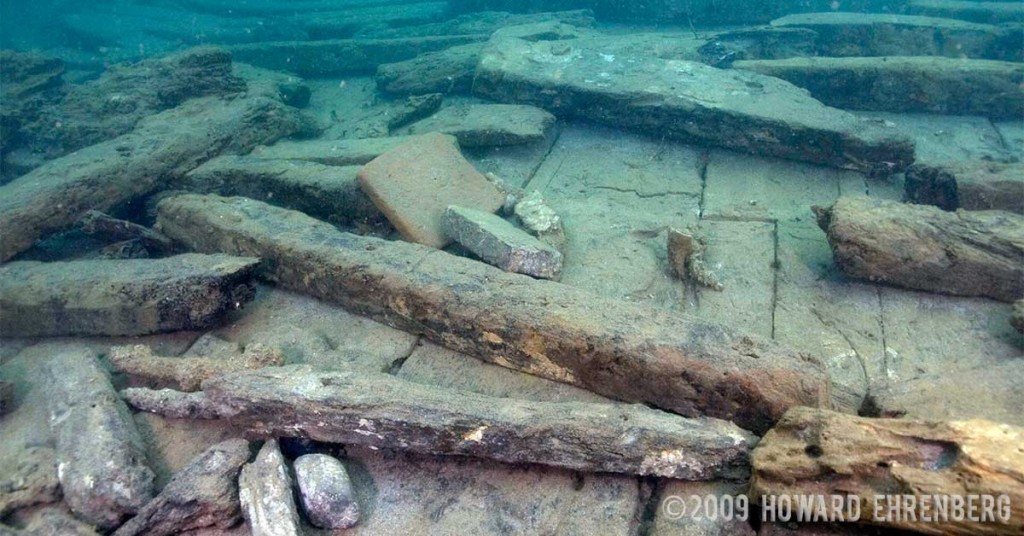 For Bowden and the rest of us, finding a pirate ship would be a truly historic discovery. Only one golden-age pirate ship, the Whydah, found by Barry Clifford in 1984, had ever been positively identified; a bell inscribed with the ship's name was found among the wreckage. (The identities of Blackbeard's Queen Anne's Revenge and Capt. Kidd's Quedagh Merchant had not been authenticated at the time.) While a ship's bell or other identifying marker might be found on modern shipwrecks, such proofs of identity are unlikely on pirate ships — vessels that belonged to no nation and prized stealth and invisibility. When we started our search, we weren't even sure if Bannister's ship was christened as the Golden Fleece or if that was just its nickname.

Bowden is best known for his salvage of the quicksilver galleons Nuestra Señora de Guadalupe and El Conde de Tolosa, both of which sank in a hurricane in 1724. The galleons had departed Spain for Mexico carrying a cargo of mercury (quicksilver) and, for many of the passengers, all their worldly possessions. Both ships sank just off the coast of the Dominican Republic near the mouth of Samaná Bay.

Bowden had us focus our search on what is today called Cayo Levantado. Levantado, now the site of a luxurious resort hotel, was at one time named Cayo Banistre (after the pirate Bannister). Many modern historians thought the Golden Fleece was near Levantado for this reason.

To help us in our quest, we consulted some experts — or at least their ships' logs. In 1687 William Phips and his crew found the wreck of the Spanish galleon Nuestra Señora de la Concepción off Hispaniola. Bowden explained that Phips had spent time in Samaná in 1686, where he also saw the wreck of the Golden Fleece on the seabed, according to the log of one of Phips' ships, the Henry of London:

At three in the afternoon Capt. Phips sent his long boat and pinnace well manned and armed to cruise along shore and see if they could find any conveniency of careening. About two miles from the ship they found a wreck in four fathom water and burnt down to her gundeck, judging her to be a ship about four hundred tons, likewise found two or three iron shot which had ye broad arrow upon them, and several firelocks…. By all circumstances the wreck is judged to be Bannister the pirate who was careening her and surprised by some of our English frigates.

One thing going for us was that this battle is the only recorded battle in Bahia Samaná. If we could find cannon balls, we should be able to find the battle site and, ultimately, the wreck. 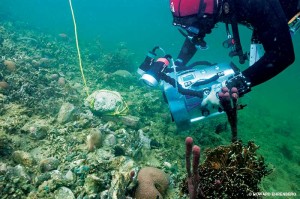 Armed with our historical evidence, we began surveying everywhere around Levantado close to 24 feet — four fathoms — deep. Unfortunately the navigational charts of the area weren't very accurate, so we ended up surveying a lot more of the bay than necessary. After months of surveying we had found several working anchors among worthless trash and the remnants of modern life in the Dominican Republic, but no sign of the Golden Fleece.

We had been searching, diving and researching the battle between Bannister and the British for months, but we were still drawing a blank. But Chatterton and Mattera were undaunted by the lack of results. They knew that Bannister was smart; after all, he escaped Port Royal and evaded British capture, which was no easy task. Mattera, a former police officer, security contractor and personal-protection professional, couldn't envision Bannister using Levantado as his hideout. "There's no place to hide on Levantado," he would say. "He would have no strategic advantage there. Where would he have put the cannons, and where would he careen his ship?"

Our search for the elusive Golden Fleece was like unraveling a mystery as we learned how to think and act like pirates so we could better understand Bannister's likely movements and actions.

As with any good mystery, we won't spoil the ending by divulging it here. To discover what we found and how we found it, read Pirate Hunters by Robert Kurson (author of the New York Times bestseller Shadow Divers), available in major bookstores and amazon.com.